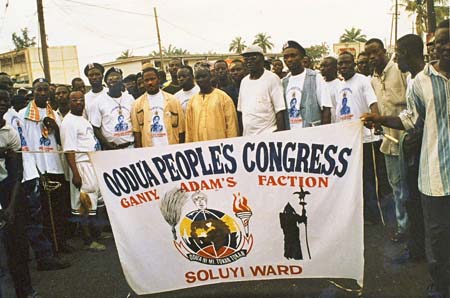 The pan-Yoruba group, Oodua Peoples Congress, OPC, has called on security agencies in the country to be alert to alleged plans by the pro-Biafran agitators to shift their campaign to Yorubaland for ulterior motives.

While urging the security agencies and Yoruba leaders of thought to guard against threat to peace in the South West geo-political zone, the OPC called for increased surveillance on the organizers of ‘The World Igbo Day 2015’ proposed to be hosted in Yorubaland tomorrow (Saturday), alleging “ulterior motives” behind the arrangement.

A statement by the National Coordinating Council of the OPC signed by Comrade Akinpelu Adeshina, in Ibadan, the Oyo State capital on Friday said, the group was “compelled to make this call given the precarious and heightened security situation in the country and the world over”.

“We see the attempt to bring the World Igbo Day celebration – in whatever guise – which is normally celebrated on the 29th September annually to the Yorubaland as a mischievous and diabolically crafted attempt to cause chaos in and destabilize Yorubaland; and this we will repulse and reject with everything at our disposal”, OPC stated.

The statement read in part: “As much as we believe in the right of every person and group to self-determination, we are of the firm belief that this particular event is mischievously conceived and earmarked to be hosted in any part of Yorubaland.

“It is true that the Yoruba are a liberal, peaceful and accommodating people, yet we are no fools and should not be treated as fools.

“For too long, the Yoruba have accommodated all other tribes and nationalities like good hosts. We have not minded the odium and other atrocities committed against our people, and on our ancestral land.

“During the last election campaigns, it was the height of all insults when the Igbos in Lagos derided and mudsling our highly revered traditional rulers, particularly the Oba of Lagos.  Never in history has it been recorded that a Yoruba person or group crossed the Niger River into either the northern or eastern part of the country to go and vilify, desecrate or insult any of their paramount rulers for political or any other reasons.

“The leeway to do business and own properties which the Igbo and other nationalities enjoy in Yorubaland has not been reciprocated for the Yoruba elsewhere, thus it would only be fair to warn anyone or group that if our relationship cannot be mutually beneficial, it should in no way be injurious to us as a people”.