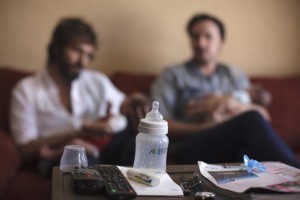 Women are told frequently by experts to maintain healthy lifestyle habits to increase the odds of conception and safeguard the health of a future child. But a new study suggests that men hoping to become fathers should also consider cleaning up their diet and increasing physical activity to improve health outcomes of a baby, even before conception. The study, published Thursday in Cell Metabolism, compared biomarkers in the sperm of obese men versus men who were not overweight. The findings offer a clue into why children of obese dads are also more likely to be obese themselves—and suggests that nongenetic factors like diet can be passed down through sperm.

The research involved 10 obese men and 13 lean men. The researchers found that the sperm cells in lean and obese men had different biomarkers in gene regions associated with appetite control. The differences, they write, are due to epigenetics—changes in gene expression that are not related to underlying DNA and are instead brought about through environmental factors including diet and exercise.

In a separate, but related study, the researchers followed men who underwent bariatric surgery. They identified some 5,000 DNA changes to the men’s sperm immediately after surgery was completed and even more a year later.