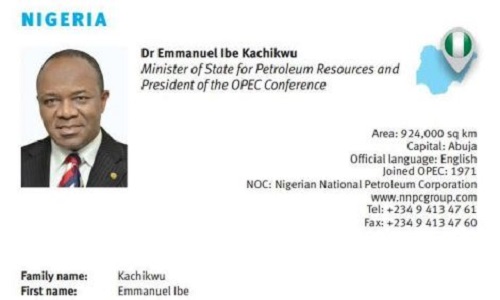 Ahead of his assumption of office as the new President of the Organisation of Petroleum Exporting Countries (OPEC), Nigeria’s Minister of State for Petroleum Resources, Dr Ibe Emmanuel Kachikwu, has made the issue of volatile oil price the focus of his tenure.

Kachikwu took over from immediate past Minister of Petroleum, Diezani Alison-Madueke, who made history as the first female President of OPEC at the 166th Ordinary Meeting of the organisation in November 2014.

While unfolding his plans for OPEC, Kachikwu, who doubles as the Group Managing Director of the Nigerian National Petroleum Corporation (NNPC), promised to do his best to delay Iran’s intended oversupply of crude oil in order to control pricing.

Speaking during his tour of plants of oil marketers in Lagos Wednesday, the new OPEC president said the issue of oil price is very sensitive and should be addressed in order to stabilise the market.

He further stated that the price of crude oil per barrel would further go down if Iran continues to over flood the market with crude oil.

“My first stage as I meet the ministers on- one- one is try to delay Iran’s flooding of the market in the last quarter of 2016. I will be talking with Iran oil minister on that so that we can stabilise the price”, he added.