While Oyegun insisted at a press briefing that the mantle has fallen on him and the National Secretary of the party, Mai Buni to speak for the ruling party, Frank insisted that he was constitutionally authorized to step into the shoes of his former principal, Lai Mohammed who is now the Minister of Information.

“It was a great loss of Lai Mohammed to the Executive but he’s still within the system. He was truly very special and unique but as we speak, the National Secretary of the party has largely on temporary basis taking up the job of communication to the press and myself (as the Chairman) is always available to any enquiry,” Oyegun said. 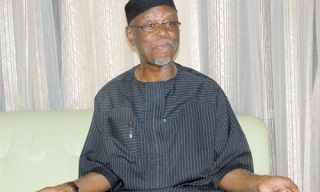 Oyegun’s position did not go down well with Frank who addressed another press briefing.

“This is the principle of the party constitution we have this also existing today in the PDP, you could see that when Muazu was not there Secondus today is acting for the party, so there is no difference, Lai Mohammad is not there so automatically I’m the acting spokesperson of this party, so I can tell you without fear or favour.

“Any other person issuing a statement is doing that maybe on a personal capacity but constitutionally I am the acting spokesperson of the party. It’s not something I need to lobby for, it is something meant to be the trend and I stand by it,” he said.