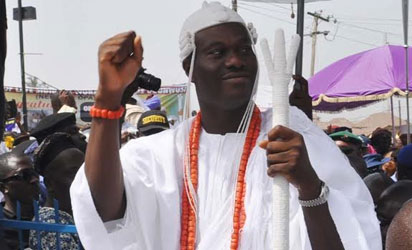 Newly-crowned Ooni of Ile-Ife, Oba Enitan Adeyeye Ogunwusi has promised that a new Yoruba nation where youth empowerment is the focus will emerge during his tenure, where all traditional rulers will unite and promote unity among the ethnic group.

“Shortly after I was named Ooni-elect, I sprang into action. I called my friend, Oba Saheed Elegushi, I spoke to the Sultan of Sokoto. I also called Kabiyesi, the Alaafin. I spoke to the Awujale and the Alake. I am prepared for the throne and this is not accidental.

“I am close to many monarchs and uniting them should not be a problem. It will be easy. No competition with anyone. And I want to announce to the entire world that a new Yoruba nation is coming,” the monarch said.

On his programme for the youth, Ooni Ogunwusi said he had experimented with a model for youth empowerment in the last three weeks, with the employment of about 3,000 youths, which has in return reduced crime rate in the town.

Ogunwusi’s coronation is coming five months after the demise of Oba Okunade Sijuwade, who passed on. The new Ooni is the 51st Ooni to ascend the throne, and his coronation came exactly 35 years and one day after the immediate-past Ooni, Oba Sijuade was presented the staff of office.

The ceremony which held at Afewonro Park, Enuwa, had in attendance dignitaries such as the Sultan of Sokoto, Saad Abubakar II, and Olu of Warri.

Co-chairman of the National Traditional Council, His Eminence, Saad Abubakar, the Sultan of Sokoto, noted that the coming of Oba Ogunwusi to the throne was timely, saying the demand for recognition by youth should not be taken lightly.

The Sultan said all traditional rulers in the country would give the Ooni the needed support to lead the change to get the youth positively engaged being one of them.