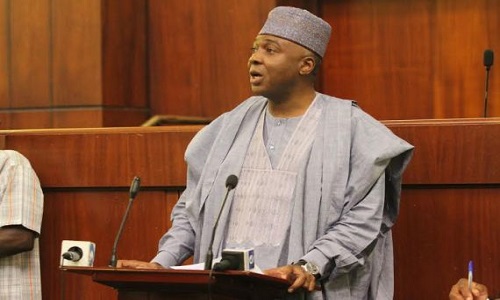 The Senate President, Dr. Bukola Saraki, on Friday assured that the senate would not censor the media.

This is contained in a statement by his Media Assistant, Bamikole Omishore, made available to newsmen in Abuja.

The statement said that Mr. Saraki gave the assurance when members of the Online Publishers Association of Nigeria (OPAN) led by its president, Olufemi Awoyemi, visited him.

Mr. Saraki told the group that he would not support any form of censorship of the media, saying that the 8th Senate remained committed to the principles of fair, responsible and open engagement.

“The Senate has no intention to pass any legislation to control or gag the press”, the statement quoted him as saying.

He, however, charged the group to do its part to ensure that international best practices were adopted, while also abiding by the ethics of journalism.

Earlier, Mr. Owoyemi, according to the statement, said that a section of the Bill aimed at criminalizing false statements and use of unsupported petitions on social media.

The group assured the president of the senate that the association comprised credible publishers of online platforms and newspapers with online presence.

“In OPAN’s assessment, the legislature remains critical to how Nigeria quickly harnesses the potentials of online technology and use of social media as a critical component of citizen engagement.

“To achieve this, OPAN Nigeria sees a link between constitutionally provided freedom of expression and responsible conduct and engagement by users and publishers.

“We aim to ensure responsible conduct across digital platforms which in some cases were as simple as recognizing the variants in existing laws around newspaper, radio, television and digital publishing and broadcast”, Mr. Owoyemi said.