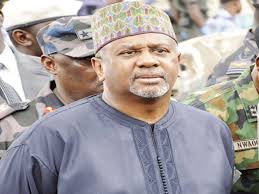 Indications emerged in the ongoing arms scandal probe that some money were disbursed to media houses from the office of the former National Security Adviser Sambo Dasuki through the Chairman and Publisher of Thisday Newspapers, Chief Nduka Obaigbena. While the Thisday boss did not deny the allegation, he explained to the Economic and Financial Crimes Commission (EFCC) which invited him to account for the N670 million traced to him as part of the $2.1 billion arms budget, that the amount he received from the Office of National Security Adviser, ONSA was duly approved for him by former President Goodluck Jonathan to compensate him for the dastardly bombing of his offices in Abuja and Kaduna by Boko Haram insurgents.

In response to a letter of invitation from the EFCC, Obaigbena said the approval by Jonathan for the payment of the sum of N550 million to him was in response to the letters of appeal he personally wrote to him pleading for assistance following the destruction of his buildings and printing facilities by the insurgents.

He wondered how such compassionate approval by the former president and subsequent payment by the ONSA could not amount to receiving suspicious funds from the office of the NSA.

“During that attack, our buildings were destroyed and we lost full colour Goss printing towers and three pre-press Computer-To-Plate and anxiliary equipment and other invaluable property valued at over N2.5 billion. This was aside the daily costs to pay third party printers of over N1 billion having lost our printing facility to terrorists due to inadequate protection by the Federal Government of Nigeria.

He noted that the money was drawn down from the ONSA in March 2015 following the appeal made to Jonathan by the Newspaper Proprietors Association of Nigeria (NPAN).

“As President of the NPAN, it was my duty to lead media leaders to hold discussions with President Goodluck Jonathan to avert a class action lawsuit against the Armed Forces and the Federal Government of Nigeria.

“On both occasions, President Jonathan said he did not wish to lay precedence and in our case, he specifically said there were many victims of Boko Haram. I had to confront President Jonathan on the issue when I learnt of approvals for the reconstruction of the Abuja United Nations Building, since we were the second major organisation to be attacked by Boko Haram after the UN attack.

“Jonathan therefore directed me to meet the National Security Adviser who processed the three payments in question.”

Obaigbena attached the exchange of correspondences between him and former President Jonathan and his approvals to the NSA for payment and said he was ready to meet the EFCC for clarification once he returned to Nigeria.