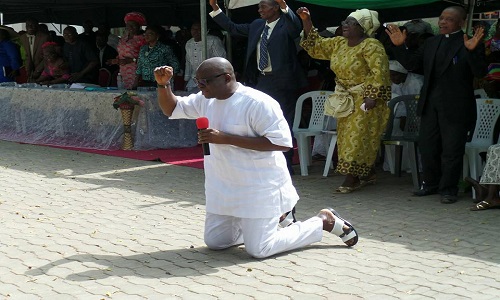 Governor Ayodele Fayose of Ekiti State in conjunction with some clerics from various denominations in the state, prayed against those they claimed were plotting his impeachment in 2016, saying they shall be put to shame if they don’t back down on their plot.

Fayose, who led the prayer meeting, asked the clerics to pray against calamity befalling the country next year, saying he foresaw certain events happening in the country in 2016 that would shake the country to its foundation.

The event, which was in collaboration with Christian Association of Nigeria, CAN, Ekiti State chapter, took place at the governor’s office in Ado-Ekiti yesterday.

Gov. Fayose warned those plotting his impeachment to desist or risk divine indignation.