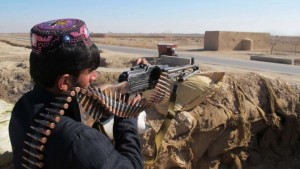 One US service member has been killed and two wounded reportedly during a special forces mission in Afghanistan’s southern Helmand province. The forces were taking part in a counter-terrorism operation when they came under fire, US officials said. One of two medical helicopter sent to rescue casualties is damaged on the ground and has yet to be recovered. The fighting is said to be ongoing.

About 12,000 foreign soldiers are still deployed to help tackle the Taliban. Some of the foreign troops were sent to counter the recent militant insurgency in Helmand. US military spokesman Brig Gen Wilson Shoffner said one service member had died as a result of wounds, adding: “We are deeply saddened by this loss… our heartfelt sympathies go out to the families and friends of those involved.”

The identity of the casualties has not yet been revealed and no official details given on their service branch.

A number of Afghan forces were also reported to have been wounded. Pentagon press secretary Peter Cook said: “This is an ongoing situation, there is still a fight going on in the immediate surroundings.” Two HH-60 Pave Hawk “medevac” helicopters were earlier dispatched to the scene. One was forced to turn back after coming under fire, Mr Cook said.