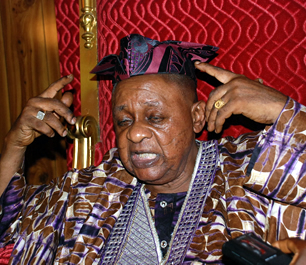 The Oyo State council of traditional rulers through the Alaafin of Oyo, Oba Lamidi Adeyemi III, have denied benefitting from the $2.1 billion arms fund, which the Traditional Council of Nigeria was believed to have benefited from.

The Alaafin made the denial in Oyo town yesterday.

According to the revered monarch, his disapproval with the setting up of the council has never been hidden from the beginning, hence, he never supported its activities.

The Oyo traditional council was reacting to the disclosure by the Economic and Financial Crimes Commission (EFCC) that the TCN was one of the beneficiaries of the slush fund in Office of National Security Adviser, ONSA.

While exonerating himself and other members of the council in the 33 local government councils in the state, the Alaafin, who spoke with members of the Nigerian Union of Journalists, NUJ, Oyo Council led by Mr. Gbenga Opadotun to commemorate his 45th coronation anniversary, said he stood firmly against the illegality of TCN and possible crisis it could engender among the traditional rulers in the country.

“When you talk of the arms deal fund, to the best of my knowledge, none of the traditional rulers in all the 33 local government councils in the state collected from such money. We are not part of it”, the Alaafin said.

The monarch also backed the anti-corruption efforts of the President Muhammadu Buhari administration, commending efforts he had made since his assumption of office last May.

He, however, warned that caution should not be thrown to the winds in the course of fighting the hydra-headed vice called corruption.

“People in authority should know their limitations too and do everything in accordance with the dictates of the constitution in order not to be seen as vindictive”, the Alaafin of Oyo added.

He noted that since his ascension to the throne 45 years ago, he had initiated a number of developmental projects in the Yoruba nation and the country at large both nationally and internationally.

The Alaafin described himself as a bridge builder among the nation’s traditional institutions with “unmatched historical facts on Yoruba’s traditional rulers and ascension to the thrones”.