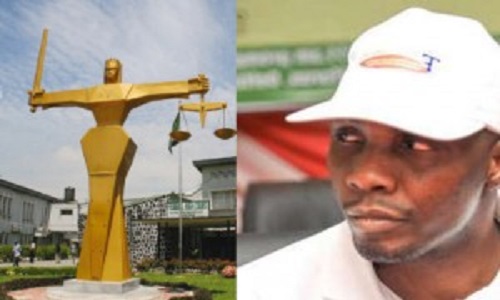 A Federal High Court in Lagos on Thursday, issued a bench warrant of arrest on a Niger Delta militant, Government Oweize Ekpemupolo, a.k.a. “Tompolo”.

Justice Ibrahim Buba gave the order at the resumed trial of Tompolo and others, over alleged theft and fraudulent conversion of over N12bn belonging to the Nigerian Maritime Administration and Safety Agency (NIMASA).

The judge directed security agents to arrest and produce Tompolo in court on Feb. 8 for arraignment.

The News Agency of Nigeria (NAN) reports the order was sequel to an application by Mr Festus Keyamo, the lead counsel to the Economic and Financial Crimes Commission (EFCC), the prosecuting agency.

Keyamo urged the court to grant the order for the arrest of Tompolo following his failure to honour an earlier summons served on him.

He informed the court that its earlier order on Jan. 13, for a substituted service of the charge and summons, were carried out.

He said the summons and charge were affixed on a conspicuous part of the residence of Tompolo at No 1 Chief Agbanu Dopa extension, Warri.

Keyamo said that the defendant had failed to show up in court and therefore, prayed the judge to issue a bench warrant for his arrest.

NAN recalls that the EFCC had on Jan. 11 filed a 40-count-charge against Tompolo and nine others bordering on theft and conversion of public fund to their private use.

The defendants were alleged to have “conspired, fraudulently converted and steal” the said sum and property belonging to NIMASA.