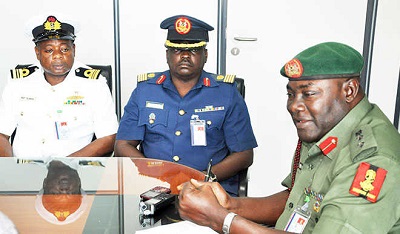 The Defence Headquarters has alerted Nigerians to the new trick devised by Boko Haram to carry out terror attacks in the country, saying they now hide their explosive devices in fruits and vegetables, which they hawk in wheel barrows in markets and crowded places in the Northeast.

The Director of Defence Information, DDI, Brigadier General Rabe Abubakar, in a statement Thursday, said the aim of the terrorists was to disguise as fruits and vegetable vendors to gain ample room to detonate the explosives.

The statement said, “The terrorists now hide IEDs under vegetable wares in carts and wheelbarrows and move to crowded places where they detonate them for maximum casualties. The recent terrorists attack in the Northeast is a case in point.

“Having been effectively dislodged and decimated, the Boko Haram terror group has begun some systematic isolated attacks mainly on soft targets in their desperation to remain relevant.

“The Defence Headquarters hereby advises the general public to constantly be alert to this latest terrorist tactics and to report promptly any suspicious persons or objects to the nearest security agency.

“While commending the general public and the media for their continuous support so far, all citizens are once again reminded that security is everybody’s concern therefore, they should join hands with the security agencies to eliminate the remnant of the terrorists”.