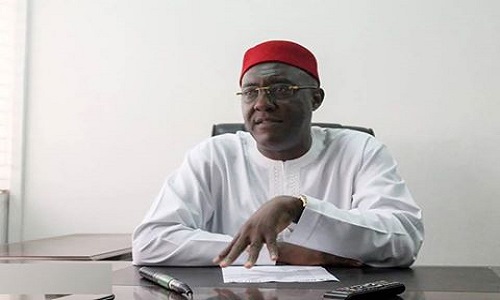 The Economic and Financial Crimes Commission (EFCC) has confirmed the investigation of Chief Olisa Metuh, the National Publicity Secretary of the Peoples Democratic Party, PDP, over his alleged involvement in the 2.1-billion-dollar arms contract scam.

The EFCC spokesman, Mr Wilson Uwujaren, confirmed Metuh’s investigation to the News Agency of Nigeria (NAN) in Abuja on Tuesday.

He said that Metuh was being investigated over the N1.4 billion traced to the account of a company, Destra Investment Limited, linked to him in the arms contract scam.

“It is true that Metuh is being investigated by the EFCC but I do not have further details on the matter.

“I am not aware of his arrest by the EFCC but will get back to you as soon as it is confirmed”, Uwujaren said.

However, a statement signed by Mr Richard Ihediwa, the Special Assistant to Metuh, said that EFCC officials visited the PDP National Publicity Secretary’s home in Abuja on Tuesday.

According to the statement, Metuh was invited to follow them to the commission’s headquarters.

It said that the officials told Metuh that he was required to clear some issues.

“Upon enquiry on the reasons for the invitation, the officials stated that he had some issues to clear with the commission.

“They also said he was not being arrested but on a friendly invitation.

“The operatives, four in number, came in a white unmarked Toyota Hiace bus”, the statement said.

It said that Metuh was still being kept at the commission’s headquarters and that his lawyers were making “frantic” efforts to reach him.

It added that the commission had yet to make public why Metuh was invited.

The statement recalled that Metuh had severally raised alarm that his life was being threatened. (NAN)