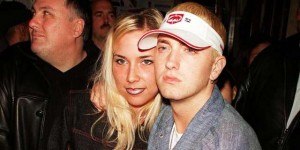 According to People magazine, the 41-year-old, who’s the biological mother of the rapper’s adopted daughter, Alaina Scott, was found unconcious in a home in Macomb County, Michigan.

The emaciated elderly woman also found with her body was taken to the hospital.

“She was found slumped over in bed and unresponsive,” Mayor James Fouts of Warren, Michigan told the mag. “It’s suspected to be drug use, possibly heroin.”

The Macomb County Medical Examiner’s office confirmed Scott’s identity, but could not confirm an official cause of death as a toxicology report is still pending.

Scott’s sister Kimberly Mathers, posted a heartfelt message saying: “Dawn was my sweet, beautiful sister who lost her way. I kept a light lit for her hoping she’d find her way back to me. I miss her and love her more than anything I could ever say. I wish she was here so I could hug her and tell her I love her.”

She added on the funeral home’s tribute wall: “Half of me is gone and I will never feel whole again. She made me laugh and kept me on my toes. She was the best sister and friend in the world and I will miss her until we are together again.”

Her memorial service is set for January 23 at a funeral home in Michigan.  Eminem or his rep did are yet to make a comment