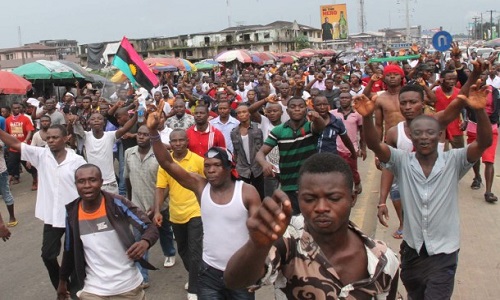 The protest by Indigenous People of Biafra (IPOB) in Aba, Abia State, turned bloody on Monday as security agents and members of the group clashed in the city, The Nation is reporting.

The group is protesting the continued incarceration of its leader, Nnamdi Kanu, by the Federal Government as well as demanding the creation of a sovereign Republic of Biafra.

The protests resumed today after IPOB and its Movement for the Actualization of Sovereign State of Biafra, MASSOB, counterpart took a break from massive street protests that shutdown socio-economic activities in most parts of the Southeast and in Delta and Rivers States last year.