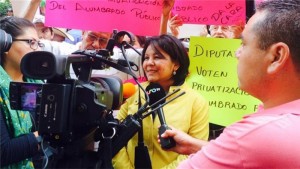 The mayor of a city south of Mexico’s capital was shot to death less than a day after taking office, officials said. Gunmen opened fire on Mayor Gisela Mota on Saturday at her house in the city of Temixco, said the government of Morelos state, where Temixco is located.

Cartels seeking to control communities and towns have often targeted local officials and mayors in Mexico. Mota’s leftist Democratic Revolution Party released a statement describing her as “a strong and brave woman who on taking office as mayor, declared that her fight against crime would be frontal and direct.”

Temixco is a city of about 100,000 people neighboring Cuernavaca, a resort and industrial city which has been suffering kidnappings and extortion linked to organised crime groups. Though Cuernavaca is the capital of Morelos, Temixco is the seat of several state institutions including the Public Security Commission, which coordinates state and local police forces. Morelos also neighbours drug cartel-plagued Guerrero state.