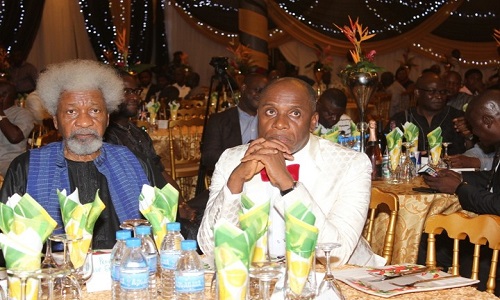 The Rivers State chapter of Peoples Democratic Party, PDP, has described as “hollow and childish”, explanations by a former Commissioner of Information in the state, Ibim Semenitari, on how the state spent the controversial N82 million for a birthday dinner in honour of Nobel laureate, Prof. Wole Soyinka.

Semenitari, currently the acting Managing Director of the Niger Delta Development Commission, NDDC, had said on Monday that the money covered specific items of the event and not just the food and drinks for the dinner.

A statement issued by Beke Anyalewechi on behalf of the former commissioner said the money was spent on “Dance Drama by University of Port Harcourt Arts Village; Great Singha & His Highlife Band; Set Design, Stage Lighting & Costume Design; Costume Design & Stage Property; Dinner; Transportation and Accommodation of guests from outside the country and those outside Rivers State; Decoration; Travels & Logistics, etc”.

He also accused the immediate past Rotimi Amaechi administration of using Prof. Soyinka’s name to loot the public treasury.

“While we agree that the Nobel Laureate deserves any form of honour in any part of the world, we find it a terrible disservice to Professor Soyinka to use his name to steal public funds,” the statement said.

“She said the N82 million was not used only for the party but that the expenses covered costume design, set design, drama, highlife band, dinner, transportation, decoration and logistics.

“These items should naturally be expected to form an important part of the birthday celebration. If they were left out, what else would make the party a befitting one for a man of the stature of Professor Soyinka?” the PDP asked.

The party also demanded an explanation for the cost of the enumerated expenses, saying the funds expended were taxpayer’s money, and should be accounted for.