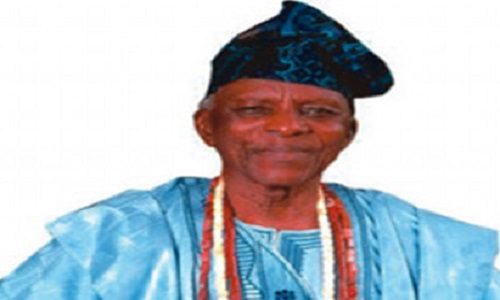 The Olubadan of Ibadan, Oba Samuel Odulana Odugade, is dead.

The monarch died in his sleep on Tuesday in his palace in the Monatan area of Ibadan, PUNCH reports. He was aged 101.

Citing Palace sources, the newspaper said a son of the deceased, Prof. Femi Lana, was immediately summoned to inform some Ibadan high chiefs about his father’s demise.

Though efforts to get the reaction of Lana were futile on Tuesday, a close source said Oba Odugade’s corpse had been deposited at the morgue of an unnamed hospital in Ibadan, Oyo State.

“I can tell you that Prof. Femi Lana and some high chiefs have taken the corpse to the mortuary but I will not tell you the name of the hospital because his death has not been formally announced”, the source said.

Another top source close to the palace, however, said the Olubadan-in-Council, comprising all the high chiefs, would have to first pay a condolence visit to the family before the formal announcement of the monarch’s death would be made.

According to the Palace source, after the visit of the Olubadan-in-Council, which is expected to take place today, Wednesday, a formal announcement would be made announcing Odugade’s death.

The source said, “The Olubadan is dead. He died peacefully in his sleep in his palace at Monatan and not in the hospital around 7.30pm today (Tuesday) due to old age. You know he celebrated his 100th birthday in April 2014; he would have clocked 102 this year. The palace chiefs invited his son, Prof. Femi Lana, who in turn, informed some high chiefs, including the Ashipa of Ibadanland, Chief Eddy Oyewole”.

With his demise, the Balogun of Ibadanland, Chief Saliu Adetunji, who was one of the nine Ibadan high chiefs recently promoted by the late Oba Odugade, is expected to be named as the new Olubadan by the Olubadan-in-Council.