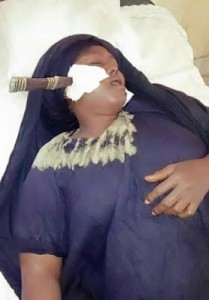 Fatuma Ibrahim who was allegedly stabbed on the cheek by her husband with a knife that went through her skull is making a slow but sure recovery after surgeons at the Kenyatta National Hospital (KNH) performed a successful operation on her. KNH Chief Executive Officer Lily Koros while addressing the media on Friday afternoon said the surgery was done on Ms Ibrahim at about midnight to remove the knife lodged in her skull after the attack.

She said that the 32 year-old woman, who had to be airlifted to Nairobi from Wajir on Thursday night after being stabbed several times by her husband, was in stable condition. Apart from the knife in her face, the patient also suffered wounds on her thigh, abdomen and arms.

Mohammed Deeq has pleaded not guilty to stabbing his wife, Fatuma Ibrahim in a Wajir court on Friday, January 8. He denied stabbing Fatuma Ibrahim and told the court he was trying to save his wife from attempting suicide.

Prosecutor Meroka Riech requested more time to await the medical report. Resident Magistrate Bildad Rongocho ordered Deeq be remanded until January 13, when the case will be mentioned. Deeq, who hails from Wajir East, appeared composed when brought to the courtroom which was packed with women and human right activists.