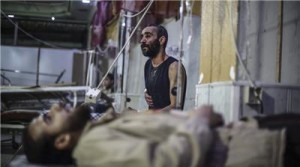 At least 42 people have been killed in suspected Russian air strikes in Syria’s Raqqa province, activists and a monitoring group say. Raqqa, a city that currently has at least 300,000 residents, became a stronghold of the Islamic State of Iraq and the Levant (ISIL) group and its self-declared capital in early 2014.

“The areas targeted by the Russian air strikes on Saturday were mostly residential areas and not for ISIL,” Ghareb al-Omawi, a media activist from the Sound and Picture group, told Al Jazeera on Sunday. “Two hospitals were also hit in the air strikes in addition to public places. Several people were also injured and have been taken to hospitals in the suburbs.”

Sound and Picture comprises activists who document and report on the situation in Raqqa and Deir Az Zor. They also provide images and infographics on the humanitarian situation on the ground. The UK-based Syrian Observatory for Human Rights put the death toll at 40, adding that eight of those killed were children. Restaurants and shops were targeted in the air strikes, the monitor said.

Russia’s official news agency, TASS, did not mention or report on these air strikes, but did release a statement that says at least 5,662 sorties on ISIL targets in the Middle East. “Since September 30, the Russian Aerospace Forces in Syria have made 5,622 sorties, including 145 sorties made by strategic missile and long-range bomber aviation, the Russian military have also carried out 97 launches of sea-based and air-based missiles,” Sergei Rudskoy, of the Russian general staff, said on Friday.