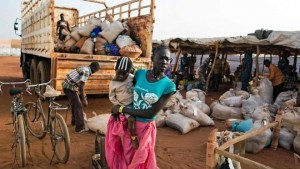 Sudan’s President Omar al-Bashir has ordered the opening of his country’s border with South Sudan for the first time since the latter seceded in 2011. The move comes days after reports that South Sudan had ordered its troops to withdraw a short way from the border. Disputes over the border remain unresolved and the two countries fought over the Heglig oilfield in 2012.

South Sudan gained independence as the outcome of a 2005 agreement that ended a 22-year civil war.  Mr Bashir has asked the Sudanese authorities to “take all measures” for the reopening, state news agency Suna reported. Last week Mr Bashir also agreed to consider lowering the fees paid by South Sudan for the use of Sudanese infrastructure to export oil.

South Sudan contains most of the oilfields that belonged to Sudan before 2011. The new country descended into civil war in 2013 when fighting broke out between forces loyal to Mr Kiir and his former deputy Riek Machar, splitting the country down ethnic lines. Hundreds of thousands of South Sudanese have fled to neighbouring countries including Sudan.