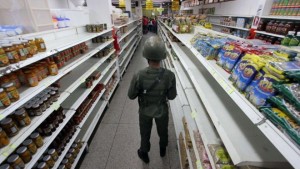 The Venezuelan government has announced a 60-day economic emergency to deal with the country’s worsening crisis. President Nicolas Maduro will govern by decree for two months. The edict includes tax increases and puts emergency measures in place to pay for welfare services and food imports.

The government’s move came as official figures released by the central bank showed that the Venezuelan economy had contracted by 4.5% in the first nine months of 2015. The emergency was declared hours before President Maduro delivers a State of the Nation address to Congress for the first time since his centre-right opponents took control of the legislature.

The decree also instilled more state controls on businesses, industrial productivity and on electronic currency transactions. Venezuela has the world’s biggest known oil reserves but the huge fall in oil prices in the past 18 months has slashed its revenues by 60%.

Annual inflation up to September 2014 is said by the Venezuelan Central Bank to have reached 141%. President Maduro and new Economy Minister Luis Salas have argued for the need to protect social programmes established by his predecessor, former President Hugo Chavez, from the global drop in oil prices.