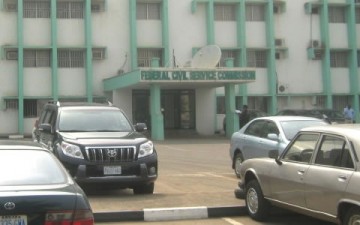 The Federal Government has dismissed some top officials of the Federal Civil Services for extorting money from 400 applicants and offering them employment illegally.

The Minister of Information and Culture, Alhaji Lai Mohammed, made the disclosure on Saturday in Lagos during a meeting with some selected On-Air-Personalities.

The meeting was part of the minister`s five-day consultation with critical stakeholders in the media industry.

“The first scandal I met in one of the parastatals when I assumed office was the illegal employment of 400 people.

“This scandal started with very senior officers up to level 17 in that department. They sent out letters and text messages asking people to apply for jobs for a fee of N400,000 and they were given letters of employment.

“They did not stop there. They invited these people to go and be captured on the IPPIS and they even took cameras to hotels to get them captured. At the end of the day the bubble burst.

“One of the victims told these officials, ‘you cannot take my money and still disengage me. I have a valid letter’. That is how we got to know that there is a dedicated account these people pay to.

“Of course, we dismissed these officials and we even handed them over to the Police,” the minster said.

He pointed out that the incident showed how faulty the IPPIS was and how it had been compromised by unscrupulous elements.

However, he said that the administration of President Muhammadu Buhari was doing its best to make the IPPIS tamper-proof and guard it from people who might want to load ghost workers on it.