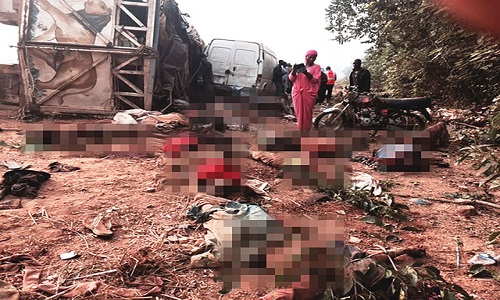 Seventeen persons were confirmed dead by the Federal Road Safety Commission (FRSC) yesterday in a fatal auto crash on the Lagos-Ibadan Expressway.

The Oyo State sector commander of the FRSC, Mr. Yusuf Salami, told journalists that 79 persons were injured in the crash.

Salami said the accident, which involved an articulated vehicle and a Peugeot J5 bus, occurred at Sepo area of the highway due to impatience, over speeding and struggle for the right of way by both vehicles, which were travelling from Ibadan to Lagos.

“They were both going to Lagos when the accident happened at about 9.30 a.m.”, he said.

“There were 96 people involved with 17 confirmed dead; it is obvious that both drivers were over speeding and suddenly lost control of the vehicles. The Peugeot bus was loaded with passengers and goods but the casualty figure rose because the other vehicle was travelling to Lagos with huge number of illegal passengers”, the sector commander added.

Salami said that the corpses had been deposited at the Adeoyo State Hospital morgue in Ibadan, while the injured were taken to the University College Hospital, Ibadan Central Hospital and Kejide Hospital. (NAN)