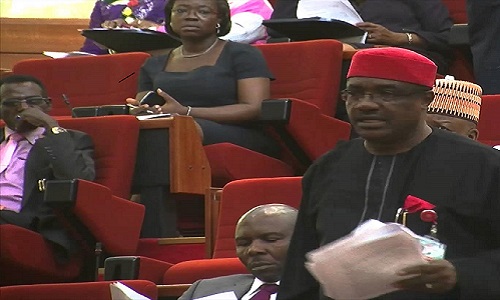 As the March 5 date for the re-run election into the Abia North senatorial district seat draws nearer, the chances of the Peoples Democratic Party candidate, Senator Mao Ohuabunwa, was brightened on Saturday as 17 out of the 23 political parties adopted him as their sole candidate.
Ohuabunwa, who was the senator representing the district until his election was nullified by the Appeal Court sitting in Owerri, the Imo State capital, which ordered a re-run, would still have to overcome the obstacles posed by the candidacies of former governor Orji Uzor Kalu of the Progressive Peoples Alliance (PPA) and Chief Bourdex Ohuoha of the All Progressive Grand Alliance (APGA).
The decision of the coalition of political parties to adopt Ohuabunwa, a former Speaker of ECOWAS Parliament, was announced at a press briefing in Umuahia, the Abia State capital after a meeting of Chairmen and Secretaries of the parties involved.
Spokesperson of the group, Hon. Menelik Ukpai, who is also the State Secretary of Inter-Party Advisory Council, IPAC, said the decision was reached after a holistic review of the antecedents of the major contestants in the elections.
According to him, the PDP candidate maintains an unparalleled lead over and above other contenders, hence his adoption.
Ukpai said: “The current race for the senatorial seat in Abia North has generated much controversy but the truth is that the senatorial district is not in need of superlative representation where a senator in an endless learning process, will sit in the red chamber only to support the proposal of others with a ‘yea or nay’ vote.
“The endorsement of Senator Mao Ohuabunwa by a majority of the members of the i

nter-party Advisory Council (IPAC) Abia State chapter is a conscientious one.
“His current stint in the senate has witnessed an unrelenting efforts to push bills that will impact positively on the lives of the people. Parliamentary representation requires an astute and diplomatic mind and that is why 17 political parties out of the 23 registered political parties in the state have adopted him as their sole candidate ahead of the election.
“We believe that those who are currently vying for the senatorial seat in Abia North, on various platforms, are well-meaning citizens, many of them have found success in other fields of endeavor, however we need experience and we have found it in the person of Senator Mao Ohuabunwa”.
The IPAC spokesperson, therefore, called on voters in the senatorial district to vote for Mr. Ohuabunwa, who he said would give them a quality representation, adding that “what we need at the Senate is a strong voice and active player not a spectator”.