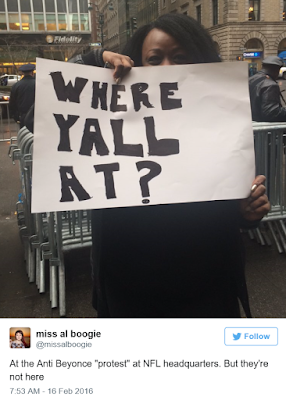 When Beyonce appeared in the SuperBowl half time event, flanked by all-black squadron of leather clad dancers wearing berets, she immediately stole the show with a routine peppered with black power references.

Then came the backlash from viewers annoyed that nods to Malcolm X and the Black Lives Matter movement had turning the sporting interval into a political platform.

But on Tuesday, only a handful of protesters turned up for anti-Beyonce rally outside American Football’s New York headquarters.

They were outnumbered by the singers’ supporters and campaigners with Black Lives Matter banners. 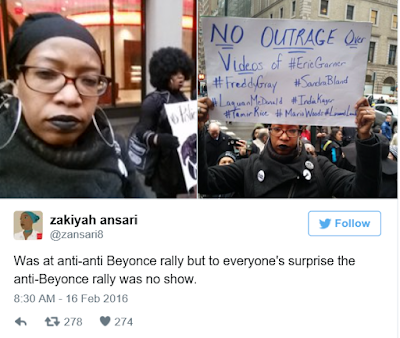 Ariel Kohane said he attended the protest because Beyonce’s new song, Formation, was a call to violence against the police.

“Some of us are surprised that there are only a couple of us out here today,” he told New York magazine’s The Cut. “It is scheduled from 8 to 4pm. It’s a business day. Also, the weather; the rain turned a lot of people away.”

Witnesses said he was one of only three people (including one person who said he had not even seen the halftime show) to heed the call to protest by a new group, called Proud of the Blues.

“We encourage anyone and everyone who supports the police to show up and march around the block of the NFL headquarters on this day. Be absolutely peace and non-aggressive,” the group said in its invitation.

“Let’s show the world that it’s not necessary to be disruptive to America while conveying an effective message to the masses.”

And there was certainly little disruption outside the offices of the National Football League, where police had cordoned off part of Park Avenue for the protesters.
In fact they were outnumbered by about 30 of Beyonce’s fans, who carried banners saying “Pro black doesn’t mean anti white,” and “Get information,” a line from the new song.
Source: Linda Ikeji Blog
AdvertisementClick Here To Join The 10,000 Naira Giveaway For 100 People!