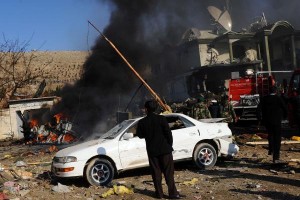 Two bomb attacks targeting police and a pro-government figures in northern Afghanistan killed at least 15 people and injured several others, authorities said Tuesday. One person was killed and seven others injured when a magnetic bomb, placed under a car in Kunduz, detonated Tuesday, China’s Xinhua news agency reported.

The vehicle belonged to Hajji Abdul Qadir, an influential figure in Kunduz province and an advocate for the Kabul government. It was not immediately clear if Qadir was killed or injured in the blast. The Taliban claimed responsibility for a separate bombing in the Parwan province on Monday. That suicide blast killed at least 14 people, including six local police officers, and appeared to have been targeted at a police commander who was among the dead.

Afghanistan’s interior ministry said Sunday that police had arrested Mohammad Sayed Raza, the Taliban governor for the Chahar Dara district of northern Kunduz province. The Kunduz bombing occurred as the third round of four-nation peace talks between Afghanistan, Pakistan, China and the United States began in Kabul.

The Parwan bombing came a day after Afghan troops withdrew from three strategically important bases in the Musa Qala and Nawzad districts of Helmand province. Afghan officials said the troops were needed in other areas more heavily contested by the Taliban, such as Lashkar Gah and Sangin.