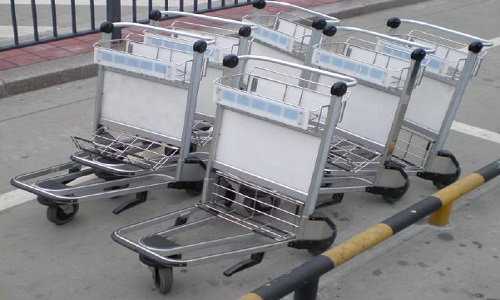 The fee currently being charged for using trolleys in Nigerian airports will soon be abolished, the Minister of State for Aviation, Hadi Sirika, has said.

The minister made the disclosure on Friday in Abuja at the inauguration of the Ministerial Committee on Assessment of Security Situation in Nigeria’s Airports.

According to Mr. Sirika, payment for trolleys would stop as soon as the current contractual agreement on the handling of trolleys was over.

He explained that the arrangement could not be unilaterally terminated as it could lead to litigation, adding that the contract would not be renewed as soon as it runs its course.

The Minister disclosed that there were petitions by some users who claimed that trolleys were covered by certain taxes and charges paid by passengers.

“We have had discussions with FAAN on this and we have decided that as soon as this contract ends, we will return back to the old system”, he said.

Mr. Sirika also assured that government would soon start the implementation of recommendations on the establishment of a new national carrier, adding that President Muhammadu Buhari demonstrated his favourable disposition to the move by setting up a committee for it, even before appointing his ministers.

According to him the committee had since submitted its report which had also been forwarded to the ministry for further action.

“The committee has done its work and its reports and recommendations have been forwarded to us; it is in the ministry and we are working on it.

“I want to tell you that we are on it and I want to add that within my purview of the management of this ministry, the committee report will not be swept under the carpet.

“It will be implemented and anywhere we do not agree, we will indicate so.

“We will be modest and courteous enough to inform the members of the committee and the public about it”, he said.

Mr. Sirika said Nigeria was not doing badly in the area of aviation security, adding that the country scored 92.6 per cent in the last International Civil Aviation Organisation (ICAO) Audit.

He said that the inauguration of the security assessment committee was necessitated by the quest for perfection and the determination to close the 7.4 per cent gap that could harm the industry.