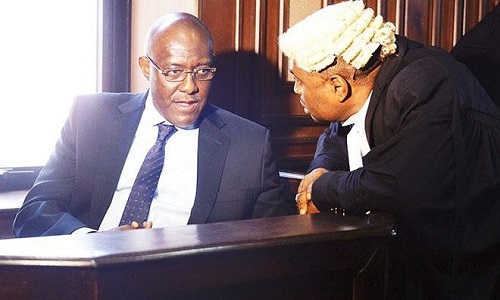 A suit filed by National Publicity Secretary of the Peoples Democratic Party, PDP, Olisa Metuh, challenging his arraignment by the Economic and Financial Crimes Commission, EFCC, for allegedly destroying evidence and receiving money from the Office of the National Security Adviser, has been dismissed by a Federal High Court sitting in Abuja.

In a ruling on Thursday, Justice Okon Abang dismissed the case for lack of diligent prosecution and ordered the PDP spokesman to pay N20,000 to four out of the six defendants, including the EFCC.

The beneficiaries of the cost which Metuh was ordered to pay, apart from the EFCC, are the Attorney General of the Federation, the Inspector General of Police and Nigerian Immigration Services.

Other defendants to the suit but who were not to be paid by Metuh are the Independent Corrupt Practices and other related offences Commission and the Department of State Services.

It would be recalled that the case with file number FHC/ABJ/CS//20/2016, was on February 9 adjourned till Thursday, but when it came up for hearing, neither Metuh nor any of his lawyers was present in court.

The EFCC was, however, represented by Mr. F.A Jirbo during the proceedings.

The absence of the PDP spokesman and his lawyers forced Justice Abang to dismiss the case on Thursday on the grounds of lack of diligent prosecution.

Metuh had filed two suits which were consolidated into one.