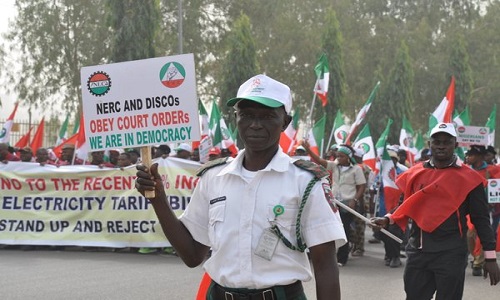 The Nigerian Labour Congress (NLC) Ogun State chapter, has expressed disappointment in the Minister of Power, Works and Housing, Mr. Babatunde Fashola, SAN, over the increase in electricity tariff.

The state NLC chairman, Comrade Akeem Ambali said the new tariff, which is about 45 per cent increment, is “a disappointment and unexpected from a man of law”.

Ambali, who led hundreds of members of the organized labour unions on protest in Abeokuta, the state capital on Monday over the new tariff, declared that the NLC would deploy all legal means to reverse the tariff, which he also described as “insensitive to the present plight of ordinary Nigerians”.

The labour leader wondered “why a Minister in the caliber of Mr. Fashola will not obey the law” adding “We are disappointed by his action”.

The Ogun NLC was making reference to a subsisting court order dated May 28, 2015 by Justice Mohammed Idris of the Federal High Court, Ikoyi, Lagos, which stopped the implementation of the new electricity tariff.

Comrade Ambali said the organized labour would continue with the protest till when ordinary Nigerians are given just, fair and appropriate electricity tariff.

The NLC chairman hinted that the leadership of the Congress is expected to meet with representatives of the federal government on the matter by Wednesday, “but not until we meet in Imo state tomorrow, where we are going to protest the sack of 3000 workers. After that we shall move to Abuja”.