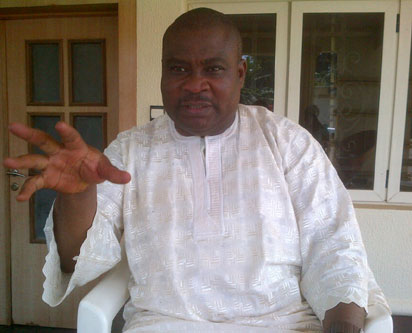 Former secretary of the Peoples Democratic Party (PDP) in Ekiti State, Dr. Temitope Aluko, has alleged that the June 21, 2014 governorship polls in the state that led to the emergence of Ayodele Fayose as governor, was rigged.

“Before the Primaries, we had this believe that because Jonathan was coming out for second term and because we are going to be the first election in the south-west, at a meeting, we told him (former President Goodluck Jonathan) that north-east, north-west and north-central may not be too sure for him because the Hausas are clamouring for presidency and that you now have south-east and south-south, you must manage the south-west,” Aluko said on Channels TV programme Politics Today on Sunday.

“It was on the basis of that that we told him that he must manage south-west.

“Because of his interest, even before winning the primaries, we did so many security reports to tell Mr President then that he must make sure that we manage south-west zone and it was because of that that he gave us the head of security agencies,” the PDP member said.

Speaking further, Aluko said that the Minister for State for Defence and Minister of Police Affairs were made to give attention to the election because “we know that APC was everywhere in the southwest and we must naturally capture part of southwest if we want to balance what our brothers in the north were likely to bring on”.

He said that there was an agreement to take out some members of the All Progressive Congress to ensure that they do not give adequate support to their members, especially as the incumbent Governor was an APC member.

“There was a strike team, a mixture of the DSS, military, the mobile police… that is about all.

“We had a meeting at Aso Rock on security and funds. We were given security and funds,” Aluko said, listing attendees to include himself, the Commander-in-Chief of the Armed Forces, the former PDP chairman, Adamu Mu’azu and Governor Fayose.

“At the meeting President Jonathan agreed that if he needed Ekiti, he would support us to ensure that we delivered.

“At the second meeting we had Obanikoro, Jelili, Omisore… It was a combination of Osun and Ekiti people and they were discussing how we were going to move to take the south-west.

“Before the primaries, His Excellency, Ayodele Fayose, said that we can only win using the military.

“Then we came up with a plan about May,” he alleged.

Aluko dismissed insinuations he was opening up to get back at Fayose whom he said reneged on the agreement they had about how to distribute offices once the PDP won.

“For the military to indict its members because of the election of a state you will know that what I am saying is not a lie.”

He also said the ‘leaked audio’ mentioned by a military official that was at a meeting he attended, which was subsequently leaked on the internet, saying it was genuine and not doctored.

Mr Aluko also said that some monies in hard currency were given as the funding for the Ekiti governorship election.

“That was the money given to the strike team. It was One million per Hilux van per day and they worked for three days,” he said, giving the sum as 132 million Naira,” Aluko claimed.

Aluko was last year expelled from the anti-party activities.