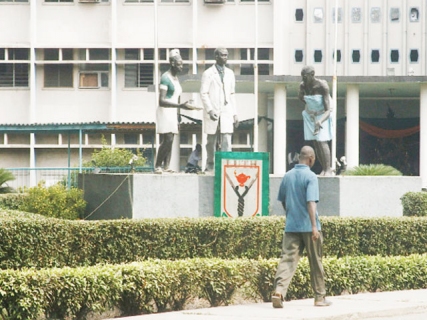 Doctors at the Lagos University Teaching Hospital (LUTH), yesterday, protested unpaid salaries and “discriminatory tax policy” which they have been suffering.

The doctors, under the auspices of the Association of Resident Doctors, LUTH-ARD, at a press conference, regretted that, despite the daunting challenges they face in their line of duty, the management of LUTH had failed to recognise their efforts and had continued to delay their salaries.

President of the association, Dr Akinkunmi Afolabi said health workers, including doctors in other Federal Government hospitals had been paid. He lamented that no official reason had been offered yet for the delay of their salaries for over two months now. Some, according to him, are even owed up to four months.

“In a sad replay of the unfortunate events of December 2014, the December 2015 and January 2016 salaries have been withheld. Members have had to toe, once again, the un-dignifying path of borrowing money to pay house rent, examination fees, and children’s school fees, amongst other pressing needs while the management has cited the oft-repeated annual mopping up exercise by the office of the Accountant General of the Federal for the non – payment of December salaries through a circular reference N0. TH/ACCT/D.27/27,” Afolabi said.

There is no reaction yet from the management of LUTH.