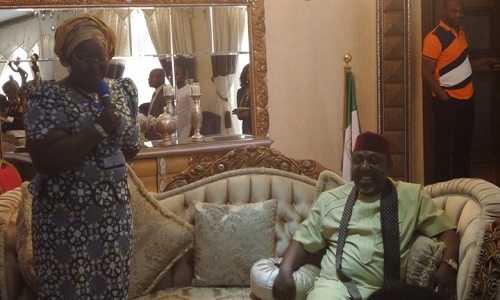 Governor Rochas Okorocha has accused the Niger Delta Development Commission, NDDC, of fraudulently short-changing Imo State and her people, adding that he was shocked to learn that billions of naira had been sent on non-existent 272 projects in the state.
A statement by Chief Press Secretary to the Governor, Sam Onwuemeodo, said Okorocha stated this on Friday in Owerri when he received in his office, the acting NDDC Managing Director, Ibim Sememitari, who is on a two-day working visit to Imo.
Onwuemeodo said Governor Okorocha expressed regrets that the NDDC, which was established in 2000 under the administration of President Olusegun Obasanjo, to serve member states, was turned into ATM for some Peoples Democratic Party parliamentarians and bigwigs from the state.
The statement quoted Okorocha as telling the visiting MD, “I am shocked to hear that the NDDC has over 272 Projects in the state for which billions of naira were also said to have been spent on. I would like to have the list of the projects, the contractors handling them and where they are sited, because Imo people would also be shocked to hear this. Let us know the projects, their sites and the amounts paid on each of them”.
He continued, “The truth is that these projects could exist only on papers because the popular impression here is that the NDDC abandoned the state and her people, while releasing money meant for projects in the state to some PDP elements from the state in Abuja who shared the money with the contractors.
“The NDDC isolated the state government. At times these wicked people behind all these fraud would ensure that both NDDC and Ministry of Niger Delta Affairs would award different contracts on one particular project and at the end of the day the job won’t be done. At times too, they would put NDDC sign board on state government project. So many funny things”.
Okorocha, who is Chairman of the All Progressives Congress Governors’ Forum, insisted that the NDDC should not be partisan.
“People from the NDDC states should be provided with services required, despite their political affliations”, he said, adding that the state has not benefited or felt the impact of the interventionist agency because no visible project has been put on ground for years.
The governor disclosed that at a point, due to frustration, he considered pulling Imo State out of the NDDC and demanding that the money meant for the state should be remitted to her directly.
“The NDDC has remained a nightmare to Imo people. With the new MD, the state can now partner NDDC with the hope that things would begin to work out fine. And in the Commission’s budget, the management should look at the areas of power and rail lines linking the NDDC states. The Commission should not be constructing boreholes, renovation of schools and health centres. Let there be light at the NDDC now”, he pleaded.
Gov. Okorocha also described the NDDC as an abode of corruption before now, and expressed the confidence that the new MD has all it takes to correct the plunders of the past administration, requesting that contract papers given to contractors should be copied to the government henceforth, to enable the government monitor the project effectively.
In her speech earlier, Mrs. Sememitari told Governor Okorocha that she was in the state to brief him on the activities of the Commission in the state, adding that Imo is the first state she would be making such visit, and said the Commission has executed 272 projects in the state since inception going by the record available to her.
She said the Commission would partner the state government especially on the issue of identifying areas where the state is in dire need of certain projects to avoid duplications, commending the governor for his giant strides in the state.