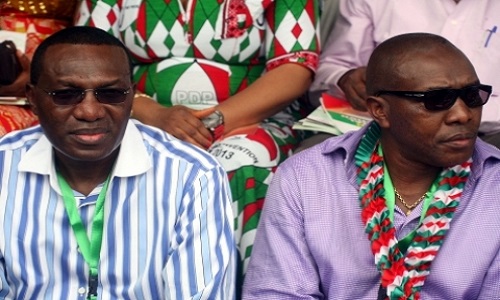 A key member of the Ejike Oguebego faction of the Peoples Democratic Party in Anambra State, Chris Uba, has warned his older brother, Andy Uba, Stella Oduah and others affected by the Supreme Court judgment of last Friday, to stop parading themselves further as senators and quit the National Assembly.

The PDP chieftain, who gave the warning in Abuja yesterday, said with the judgment by the apex court, the affected senators and House of Representatives members in Anambra State elected on the platform of the PDP had lost their seats and had no right whatsoever to cling on to their seats.

To prove his seriousness over the judgment, Ubah vowed to storm the Independent National Electoral Commission headquarters today to demand for their Certificates of Return so as to put an end to the refusal of the former lawmakers to comply with the court order.

The Supreme Court had in its ruling, upheld an earlier decision by Justice Chukwu of the Federal High Court declaring Ejike Oguebego as the authentic State Chairman of the PDP in Anambra State, saying the list of candidates for various elective positions submitted by the Augustine Akobundo faction to the INEC, was illegal.

In their reactions, both Andy Uba and Oduah faulted the apex court judgment, insisting that they were not party to the suit, which basically had to deal with issues of leadership crisis in Anambra PDP.

But Chris, who described himself as “Senator representing Anambra South” while speaking with reporters in Abuja, expressed shock that those who should be conversant with the laws of the land could be deceiving the public regarding their true status after the Supreme Court failed to recognise the dubious way through which they got to the Senate.

He said: “The time for substitution had passed and we were busy doing our campaigns when, one week to the election, the Andy Uba faction went to the Court of Appeal and set aside the judgment of the High Court. Based on that, they took the judgment to INEC and their names were used to substitute our own. We cried foul then, insisting we were not party to the suit but INEC insisted that our names were initially published based on an earlier court order and that we should go on appeal.

“Now, they (Chris Uba and Oduah) went on air and issued press statements to deceive the public that the order from the Supreme Court did not affect them because they were not a party to the suit. The question is: when our names were removed by INEC and replaced with theirs, were we party to the suit? Now they are shouting and trying to misinterpret a clear judgment that has removed them and given us victory”.