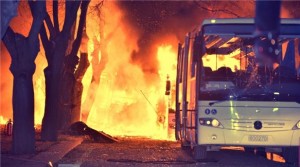 At least 28 people have been killed and 61 more wounded in a large explosion targeting a military vehicle in heart of the Turkish capital of Ankara. Al Jazeera’s Zeina Khodr, reporting from Gaziantep, said officials believe a car bomb had caused the explosion on Wednesday evening and the target had been Turkish military personnel, who were travelling in a vehicle which was stopped at a traffic light.

The death toll rose steadily on Wednesday night, with those wounded in the blast sent to hospitals across the city. Turkish President Recep Tayyip Erdogan called for an urgent emergency meeting with top level security officials in Ankara.

“We will continue our fight against the pawns that carry out such attacks, which know no moral or humanitarian bounds, and the forces behind them with more determination every day,” Erdogan said in a statement. There was no immediate claim of responsibility, but government officials said they were treating the incident as a “terrorist” attack. Analysts and unnamed Turkish officials said the Kurdistan Worker’s Party (PKK) armed group would be among the leading suspects.

The explosion was heard across the capital when it went off at about 6.15pm local time. The attack happened at the height of evening rush hour, not far from Turkey’s parliament, government buildings and military headquarters. Witnesses shared images on social media showing a large plume of smoke rising into the sky and and local news footage showed a large fire burning at the site of the explosion.