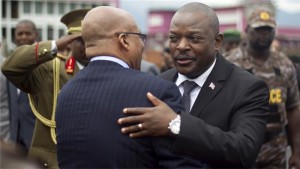 The African Union (AU) will send 200 human rights and military monitors to Burundi, South Africa’s president said, after a trip to the country that is facing its worst crisis since a civil war ended a decade ago. Jacob Zuma, delivering a statement on Saturday by the delegation of African leaders that he leads, did not say when the monitors would arrive in Burundi, where more than 400 people have been killed since April.

“The government of Burundi has committed to the following: the government will continue the steps it has begun to open up space for free political activity by the people of Burundi and ensure the freedom of the media. The AU will deploy 100 human rights observers and 100 military monitors to Burundi to monitor the situation,” Zuma said.

“We are pleased with the participation and contributions of all the sectors. The high-level delegation of the heads of state and government express its concerns about the levels of violence, loss of life and the general state of political instability in the country. We are, however, pleased that all parties expressed strong commitment to resolving whatever political problems exist through inclusive and peaceful dialogue.”

Details about the new mission were not immediately clear. Diplomats said other African monitors sent to Bujumbura last year had been stuck in their hotel unable to work because Burundi refused to sign a memorandum allowing them to operate.