People always have bad stuff to say about the Nigerian police. They love bribe, they are never there on time when you call upon them, they can never help you for free and some of them are trigger happy. All these complainers most likely do not think about the welfare of these police officers, how small their salaries are or whether they are well equipped. Okay, you don’t complain about them in all that, but too are also likely to get on their nerves and without you even knowing it. INFORMATION NIGERIA has put together 6 things you do that also makes a policeman angry… Calling a superior officer: The policeman hates it when they stop you during stop and search, and there is obviously something wrong with your vhicle – like your papers have expired, and instead of corporating with them, you pick up your phone and start calling their ‘oga’. To make matters worse is when the phone has to be passed to them.

Driving an officer’s car: Some Nigerians do this a lot. They put a military official’s stuff (like baret and horse whip) in their car or they drive their car and when they stop them, they instantly let them know the car is a ‘staff’s’ or say they know a superior officer. 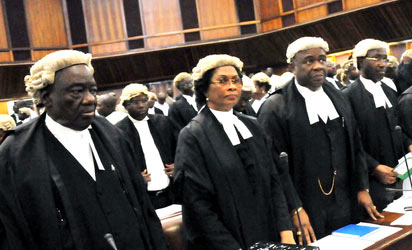 I’m a lawyer: It is known fact that most police officers do not like lawyers and the reason is simple; lawyers act like they know the law too much, making an average police officer look totally dumb and stupid. No one likes to be reduced to nothing, not even the police.

Speak too much English: An average police hates it when you turn into an emergency English professor on them when they stop you or you have cause to interact with them at the station. Most of them love pidgin English too much and it’s their easiest way to communicate. Speaking ‘big big English’ sort of throw them into a state of confusion and leaves in short of words.

Taking a photo: They hate it when you bring out your phone camera to take a photo of them when they are doing something illegal or embarrassing. And in this era of camera phones, many police officer have lost their jobs while some others have be demoted.

Excuses: An average policeman hates excuses and many Nigerians are the kings and queens of giving excuses. When caught in the act of doing something wrong, they try to wriggle their way out of police net by giving unfounded excuses. Either settle or go with them to the station, enough of your bloody excuses (LOL)