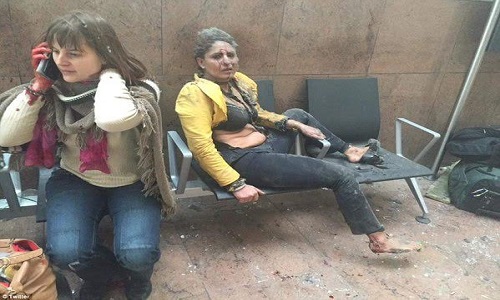 President Muhammadu Buhari on Tuesday described the terrorist attacks at the Zaventem Airport and Maalbeek Metro Station in Brussels, the capital city of Belgium, earlier today as atrocious, joining the list of leaders across Europe and the rest of the world, who have condemned the attacks.
In a statement issued by Femi Adesina, his Special Adviser on Media and Publicity, Mr. Buhari commiserated with Prime Minister Charles Michel and Belgians over the loss of over 30 lives in the attacks.
“The president assures Prime Minister Michel and the people of Belgium that having suffered the horror and anguish of incessant terrorist attacks over several years, Nigeria stands in full solidarity with them on this day of national pain and trauma.
“President Buhari believes that the appalling attack on Brussels reinforces the need for greater international cooperation to effectively confront and destroy global terrorism and its perpetrators.
“The president assures the global community that under his leadership, Nigeria will continue to work with other countries of the world to ensure that terrorism never triumphs over free, peaceful and law-abiding nations and people of the world.
“He wishes the more than 100 persons injured in the attacks a speedy recovery”, the statement adds.