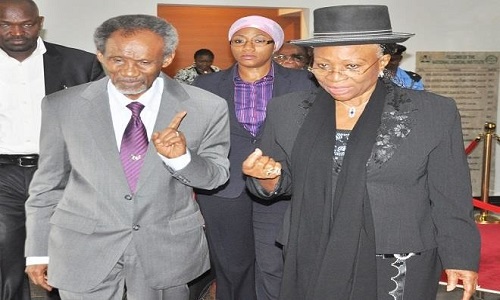 The Chief Justice of Nigeria (CJN) Justice Mahmud Mohammed has renewed his charge to judicial officers to be upright and above board, warning that any member of the bench found culpable of corrupt practice would be dealt with appropriately by the National Judicial Council (NJC).

Justice Mohammed gave the warning yesterday while declaring open the 2016 refresher course for judicial officers with the theme “promoting judicial performance through innovations and reforms”, which held at the National Judicial Institute, Abuja.

The CJN noted that negative effects of corruption have been experienced by every Nigerian in one way or the other.

“At this crucial time in our nation’s history, we must show red card to corruption, while joining hands as patriotic citizens to campaign for zero-tolerance for corrupt practices within our courts.

“We must not forget our noble duty as Ministers in the Temple of justice to uphold the Rule of Law impartially and without fear”, he said.

Mr. Mohammed further noted that the Judiciary has had to endure intense, largely unjustified and grossly uninformed criticisms regarding delay in the administration of justice.

He, however, urged the judges to treat cases related to economic crimes and corruption with the necessary urgency and apply the law strictly in order to render justice in a satisfactory manner to all parties.