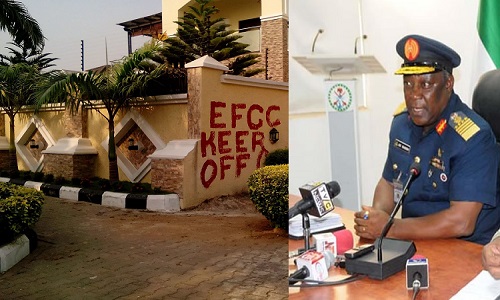 The ordeal of a former Chief of Defence Staff, Air Chief Marshal Alex Badeh (retd.), may have taken a turn for the worse following the discovery by the Economic and Financial Crimes Commission (EFCC) of $1million cash in a mansion belonging to the former defence chief.

The cash is believed by investigators to be part of the diverted arms procurement funds.

He, however, maintains his innocence in the ongoing arms procurement scandal also known as “Dasukigate”, claiming he is being persecuted for no just cause.

A report by The Nation newspaper said the anti-graft commission discovered the $1million tucked in Badeh’s room.

A top source in EFCC said: “Apart from NAF funds, investigation confirmed that Badeh diverted funds meant for procurement of arms to Bureau De Change. We have interacted with some Bureau De Change operators.

“When we searched his mansion at 6, Ogun River Street in Maitama District in Abuja, $1million raw cash was found in one of the rooms.

“Our operatives made sure that the search of the house was conducted in the presence of Badeh’s neighbours, who can attest to the discovery. We ensured that these neighbours witnessed our operation”.

Responding to a question, the source added: “Badeh has a case to answer on diversion of funds voted for arms procurement. I cannot tell you whether or not he will face separate charges on the $1million”.