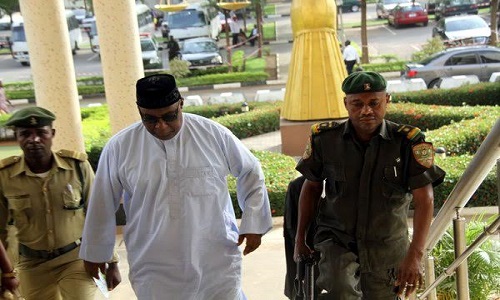 According to the witness, a retired director of Finance of the Nigerian Air Force, the sum of N4 billion was released to the Force as statutory monthly allocation for personnel salaries and allowances between September 2012 and December 2013.

Yusha’u, however, disclosed that out of this amount, only N2.3 billion is actually used for the emoluments.

He said that of the N1.7 billion outstanding, N558 million was usually earmarked for the office of Badeh, who was then Chief of Air Staff, for general administration while the rest was disbursed to the various commands and units for priority projects and training.

The retired Air Force Finance Director said each month, he alongside one Group Captain M. A. Sini would convert the amount controlled by the Air Chief to dollars and take it to his house at Niger Barracks, Abuja.

He said the transactions are usually done without written instructions or acknowledgment by Mr. Badeh.

“The only instruction he gives in writing are those requests forwarded in writing from branches and units for approval,” he said.

“Where such approvals are given, they are forwarded to my office for necessary payments”, Mr. Yusha’u added.

The witness further narrated how Badeh directed him to buy personal mansion for him at No 6 Ogun River Crescent in Maitama at the cost of N1.1bn; land for a shopping plaza in Asokoro.

The witness said Badeh also bought a personal land in Yola and developed it with funds from the force.

He further said that N120 million was at one time allotted for his office on a monthly basis, but that he rejected the offer, since he did not see any need for the money.

The witness said another building which Mr. Badeh said he would use as his office, was purchased at N650 million, and under the name of a certain engineer, Mustafa Yarima.

Another building was purchased for his the former Air Chief’s son, Alex Junior, at N260 million and renovated at N60 million, while N90 million was used for the purchase of furniture.

A fourth building was purchased at N330 million for Mr. Badeh’s second son, identified merely as ‘Kam’ after a previous property was purchased for Mr. Kam at N240 million which he did not approve of.

Two other houses were also purchased in Kaduna, both of whom were uncompleted building.

All the houses were bought under the name of a third party, and mostly paid for, from the sum of N558 million remitted to Mr. Badeh monthly.

After the prosecution concluded its examination of the witness, the defence counsel sought the approval of the court to adjourn the case because some of the information contained in the witness’ evidence were not in the stated proof of evidence.

Counsel to the accused, Samuel Zibiri, asked the court to give him time to prepare the necessary questions for cross examination in the interest of fair hearing, giving the fact that new details had emerged that he would need time to properly analyse.

The counsel to the second defendant, Simon Olugunorsiha, also asked that he be given time to see to his health.

After listening to their submissions, the trial judge, Okon Abang, adjourned the case to March 23, for cross examination of the first Prosecution Witness.