Home Metro News I Feared I Was Going To Die On My Coronation Day –...
Facebook
Twitter
WhatsApp 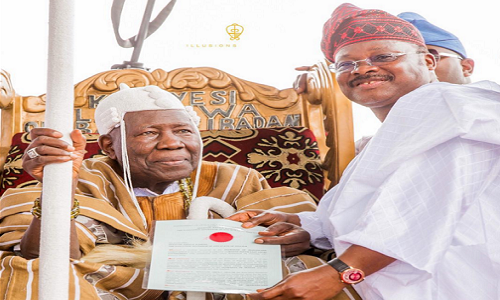 The Olubadan of Ibadan, Oba Saliu Adetunji, has confessed that he thought he was going to die on the day of his coronation, saying the sight of the mammoth crowd that came to witness the historic event scared him.

Adetunji spoke in his palace yesterday when Bishop Wale Oke of the Sword of the Spirit Ministries, Ibadan, paid him homage at his palace.

“On my coronation day, I was afraid. I wept and I thought I was going to die”, the newly crowned Olubadan revealed.

Oba Adetunji, who said he never dreamt of becoming the Olubadan, added that he was brought up by the late Oba Yesufu Oloyede Asanke.

“I never knew I will be Olubadan when I was under him, but years after his death, I was installed as the monarch”, he said.

He said: “They have turned kidnapping into a business.

“I read in the papers that three clergymen in Kaduna were kidnapped and their abductors are demanding for N100 million.

“I appeal that they should be released immediately”.

The cleric added that government at all levels must make kidnapping a capital offence, adding that: “if you kidnap anybody and you are caught, then you are gone”.

On the reason for his visit, Mr. Oke said he was in the palace to congratulate the Olubadan and to pray for longevity and sound health for him.

“I came here to congratulate the Olubadan on his installation and to also let him know that he has a son among the men of God in the country”, he said.

Oke prayed that Oba Adetunji’s reign would be prosperous, with the ancient city witnessing economic prosperity.

The bishop also called on Nigerians to be patient with the Joint Admission and Matriculation Board (JAMB) over the irregularities in the University Tertiary Matriculation Examination (UTME).

“I don’t support the public clamour for the scrapping of JAMB because you don’t throw out the baby with the bath water”, he said.