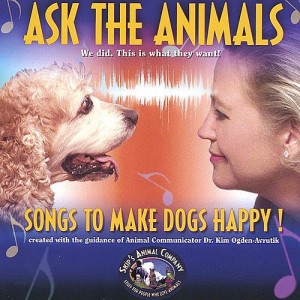 Since 1999, The Laurel Canyon Animal Company has been producing music exclusively for animals – particularly dogs. The Los Angeles company regularly collaborates with animal communication experts and even psychics to get dogs directly involved in the music making process and the tunes they release are all chosen by the animals. “We’ll take whatever the dog says and turn it into a song,” said co-founder Skip Haynes. “We’re probably the only people in the world to involve animals in the creative musical process. We’re trying to create a bridge between animals and human beings using music, because that’s what we do.”

“Each CD we produce is devoted to a particular kind of animal or species. Each track is devoted to a unique concern, situation, or shared experience of the people who love those animals or the animals themselves. We utilize the writing, production, and conceptual talents of animal loving writers, producers, artists, communicators, musicians, poets – and of course, animals from all over the world.”

All the albums that Laurel Canyon has produced so far are listed on their website, Petcds.com, along with sample clips from various songs. Their latest release, titled I’m Here For You, is a collaboration between the company, animal communicator Paula Brown, and a therapy dog named Surf Dog Ricochet. According to the website, they used Paula’s “reading” of Ricochet to create a song and played it back to the dog. “Based on the dog’s responses to the song as translated by Paula, the final adjusted song was finished utilizing the talents of vocalist Donna Delory, also approved by Ricochet.”

Bring an Animal Home for the Holidays is a seven-track album they created for Christmas, with tracks such as ‘Holiday Bark’, ‘Jingle Fish’, ‘Squeaky Christmas’, and ‘Animal Holiday’. Their album for cats, titled Cat-a-Tonic, includes tracks like ‘Litterbox Boogie’, ‘It’s All About Me-ow’, and ‘Cat O’Nine Tails’. They also released a CD called Music from the Pink Dolphins, to raise awareness and funds for the protection of rare Pink River Dolphins. And for gorilla lovers, they have a CD titled Koko – Fine Animal Gorilla.