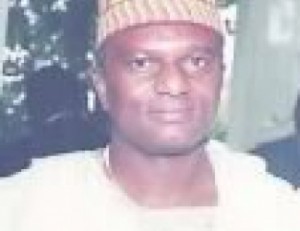 On this day in 1995, Lawan Gwadabe was arrested, on a charge of plotting a coup against the Abacha government, and was jailed, tortured and later convicted of treason along with others…

Colonel Lawan Gwadabe was Military Administrator of Niger State in Nigeria from December 1987 to January 1992 during the military regime of General Ibrahim Babangida.He was accused of planning a coup against General Sani Abacha in 1995, for which he was jailed, tortured and convicted of treason. After Abacha’s death he was granted a state pardon.

Gwadabe served as Chief of Staff of the Gambian Army, succeeding Brigadier Abubakar Dada. On his return to Nigeria after the July 1994 Yahya Jammeh coup in Gambia, he was briefly Principal Staff Officer to General Sani Abacha before being appointed commander of 23 Armored Brigade in Yola.

On 1 March 1995 he was arrested on a charge of plotting a coup against the Abacha government, and was jailed, tortured and later convicted of treason along with others. He was on death row when Abacha died unexpectedly in June 1998.Years later, Abacha’s chief of staff Lt-Gen. Oladipo Diya said that he considered that the claimed coup plot was non-existent