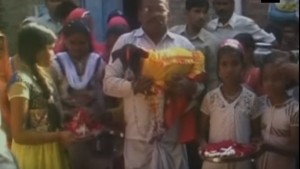 Over 5,000 people attended a canine wedding, held according to traditional Hindu rituals, in the Pawara village in the northern Indian state of Uttar Pradesh. It could’ve been the scene from any Indian wedding — the guests were dancing to the tunes of a local DJ, while the ‘groom’ Shagun arrived in a special car decorated with flowers.

The ‘bride’ Shaguniya’s owner Jung Bahadur even shed a few tears during the wedding ceremony. “Although she is my dog, she is like my daughter,” the sobbing owner said on camera.

Indian fare was served at the wedding. After the ceremonies, the couple finally left with together in a car.