Home General News World news Zimbabwean Govt. To Own All Diamonds Found In The Country, According To...
Facebook
Twitter
WhatsApp 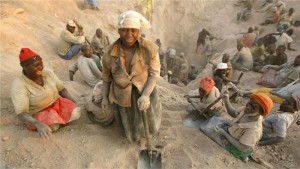 Zimbabwe’s President Robert Mugabe has announced plans for his government to take control of all diamond mining operations in a bid to put an end to alleged rampant swindling linked to the multi-billion dollar gem industry in the poverty-stricken country.

Mugabe’s statement came a week after authorities ordered all private mining companies to halt work and leave the country’s Marange fields, which in 2013 reportedly produced about 13 percent of the world’s diamond supply, saying that their working licenses were not renewed. “The state will now own all the diamonds in the country,” Mugabe said on Thursday in an interview with state broadcaster ZBC TV.

“Companies that have been mining diamonds have robbed us of our wealth. That is why we have now said the state must have a monopoly,” Mugabe said. Zimbabwe was the eighth largest diamond producer in the world with 4.7 million carats in 2014, according to industry group Kimberly Process. The Zimbabwe Herald newspaper cited Mugabe as saying that he suspects at least $13bn in revenue from the country’s diamond industry remains unaccounted for.

“We have not received much from the diamond industry at all,” he said. “Not by way of earnings. I don’t think we have exceeded $2bn or so and yet we think that well over $15bn … have been earned in that area.” Mugabe said the nationalisation of the industry was necessary to prevent widespread swindling and smuggling by mining companies.