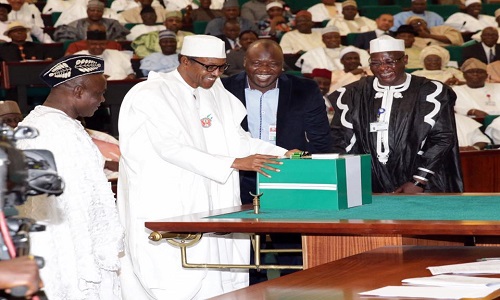 The Presidency has reached out to the leadership of the National Assembly for a “preliminary” deal on contentious areas in the 2016 budget, Daily Trust is reporting.
The newspaper said the move was confirmed by the Senior Special Assistant to the President on Media and Publicity, Mallam Garba Shehu, yesterday.
The Executive and Legislature, particularly the Senate, recently traded blames over President Muhammadu Buhari’s alleged refusal to sign the 2016 budget into law.
While the House of Representatives said it would review the fiscal document and resolve any grey areas with the Executive in the national interest, the Senate adopted a no-going-back stance, urging the president to sign the budget as passed by the National Assembly and later send a Supplementary Bill to capture any projects reportedly expunged in the current budget details.
It would be recalled that the Federal Executive Council (FEC) after an emergency meeting on April 8 to scrutinise the budget details, had reportedly discovered that the National Assembly tampered with certain key projects contained in Buhari’s proposals.
The legislators were alleged to have removed from the budget, the Calabar-Lagos coastal rail line project for which the president had provided N60 billion in the budget estimates, an allegation the National Assembly strongly denied, accusing the Executive of making false allegations to cover up for its blunders.
The FEC was reported to have among others discovered that the amount proposed for the completion of the Idu-Kaduna rail project was also reduced by N8.7bn while some projects were inserted into the budget by the legislators without consulting the Executive.
In spite of the media war sparked by the 2016 budget debacle, Mr. Shehu said that the Executive wanted a common ground that would help resolve all the issues in contention.
“We have reached out to the leadership of the National Assembly on how to reach a preliminary agreement with them on the grey areas to see how the issues in contention will be sorted out. It is when we reach a common ground that the next thing will be done”, he said.
The presidential aide, however, declined divulging further information on the nature of the agreement being sought with the legislature.