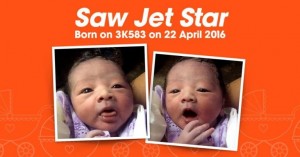 A mother decided to give her baby a unique name after giving birth aboard a flight on an Asian airline. The 6-pound, 7-ounce baby boy was given the name Saw Jet Star after being delivered on a Jetstar Asia Airways flight.

“We’re most pleased to announce that a baby boy, named Saw Jet Star, was delivered safely onboard 3K583 by a team of doctors and the crew after the flight landed in Yangon,” the airline wrote.

Both the mother and the newborn child were said to be in good condition following the birth.

The airline also noted that the baby was the first ever born on one of their planes and pledged to provide approximately $750 worth of baby supplies to the family.