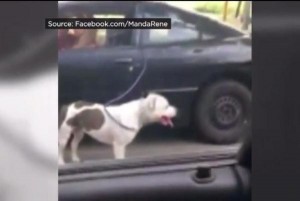 A California woman captured video of another motorist walking her dog by holding its leash out of the car while driving down a Stockton road. Amanda Brajkovich captured video showing part of her confrontation with a motorist she encountered on a Stockton street holding onto her dog’s leash while the canine was walking next to the car.

The video shows Brajkovich ask the woman why she’s using the unusual dog walking method, and the driver defends the practice, saying the dog wasn’t being dragged. Brajkovich’s video shows the motorist speed up, forcing the dog to run along beside the car to avoid being dragged. “First thought was ‘oh my god this dog is going to get hurt’ you know, maybe a car’s going to go past him and hit him,” Brajkovich told KTXL-TV. “You’re going to be a dog owner, a responsible dog owner, then you need to get out and walk your dog you know, don’t be lazy.”

Phillip Zimmerman, director of Stockton’s animal services department, said he found the video distressing. Zimmerman said he was concerned about the children seen inside the woman’s car learning the wrong lessons. “We have a lack of humane education not only for adults obviously in this case but as children as well,” he told KOVR-TV. “If we don’t teach children that this isn’t OK, this is what happens.”

Zimmerman said he would recommend the woman be charged with animal cruelty under California Penal Code 597T. The Stockton Police Department said officers reviewed the video and did not believe there was evidence of animal cruelty, but officials said the motorist would have been charged with distracted driving if she had been seen by an officer.