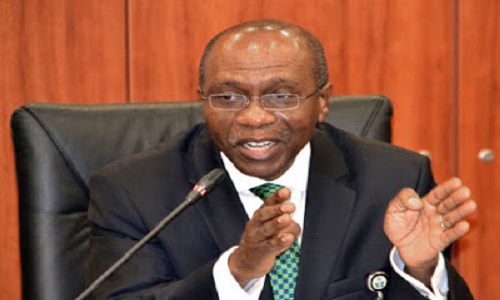 Governor of the Central Bank of Nigeria, CBN, Mr. Godwin Emefiele, did not travel in a private jet to bury his mother last week, a statement by the apex bank said on Saturday.
The denial was in response to reports especially in the social media that Mr. Emefiele was in the habit of flying private jets to attend meetings locally and internationally.
In the statement signed by its acting Director of Communications, Isaac Okoroafor, the CBN said: “Mr. Emefiele and his family flew a commercial Arik flight from Lagos to Benin for their mother’s burial”.
Okoroafor further explained: “In 2015, in response to the economic downturn and cost-cutting stance of government, Mr. Emefiele ordered the stoppage of the use of chartered flights by the bank.
“Since then, neither Mr. Emefiele nor any of the Deputy Governors has used the services of private chartered flights and the CBN has not paid a kobo for private jet services”.
The statement added that the governor and other principal officers of the CBN “have religiously maintained the modest disposition of using regular flights, including doing several trips by road to and from different parts of the country”.
It insisted that no private jet was used by the CBN governor, his immediate family or other principal officers of the bank during the burial of Emefiele’s mother.
For several years in the past, the CBN, Okoroafor said, used private and official chartered flights in making urgent travels to meet needs in remote, not easily accessible locations or in cases where timing might be critical to matters of urgent national importance.
This practice, he pointed out, was in place long before Emefiele took over.
“In fact it is on record that the past two CBN governors actively used chartered private jet services to meet urgent national assignments”.
Okoroafor added that in recognition of this critical need in its smooth operations, the CBN had in the 1990s acquired a dedicated jet for this purpose and urgent currency movement.
He said it was, however, taken over by the military administration when there was a more urgent need for it at the State House.
Thereafter, the CBN occasionally used the chartered services of private operators and those of the Presidential Fleet when available, both of which were paid for, he added.
“All accounts still point to the fact that the Emefiele’s mother’s burial was a model in cost-cutting and an uncommon demonstration of his modest, made-in-Nigeria philosophy”, Okorafor said.